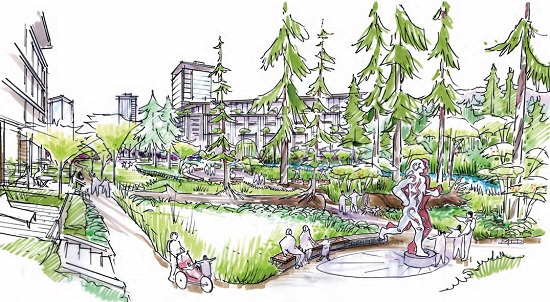 There are new details on the Heather Lands project that show an early direction for some of the architectural designs, and an increase in the number of homes, especially non-market housing.

The joint partnership between federal crown corporation Canada Lands Company, and three local First Nations — Musqueam, Squamish, and Tsleil-Waututh (MST) — has submitted the rezoning application for the redevelopment of the former RCMP headquarters.

The 21-acre site at 4949-5255 Heather Street and 657 West 37th Avenue is located west of Cambie Street and Queen Elizabeth Park, and south of BC Children’s Hospital. It is framed by West 37th Avenue to the north, West 33rd Avenue to the south, the lane behind Ash Street to the east, and the lane behind Willow Street to the west.  The submitted rezoning plans are guided by city council’s May 2018 approval of the site’s policy statement.

The policy statement plans called for 2,300 new homes with 20% as social housing and 20% for more affordable, attainable homeownership. But the newly submitted rezoning has outlined an expanded housing component, with a total of 2,612 homes, including 1,672 condominium homes, 300 market rental homes, 100 moderate-income market rental homes, and 540 units of social housing.

The Heather Lands is one of five neighbourhood-sized redevelopments within the Cambie Street Corridor.