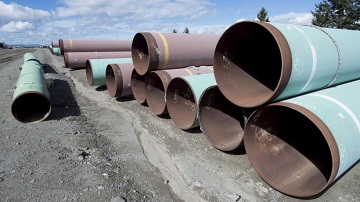 A pair of B.C. Indigenous groups have dropped out of the appeal process for the Trans Mountain Pipeline epxansion project.

The Upper Nicola Band, located near Merritt, B.C., and the Stk’emlupsemc te Secwepemc Nation, based in Kamloops, are no longer trying to block construction, but other opponents are still continuing their fights against the project.

EcoJustice — Canada’s largest environmental charity — has now filed an appeal to the Supreme Court of Canada in an effort to defend endangered southern resident killer whales.

The environmental group is acting on behalf of Raincoast Conservation Foundation and Living Oceans Society.

Together, the organizations allege the federal government violated the Species at Risk Act when it approved the pipeline for a second time in June of this year.

EcoJustice says that if the expansion is built, there will be increased tanker traffic and the risk of a catastrophic oil spill.

Margot Venton, nature program director for EcoJustice, adds that 73 southern resident killer whales will be in danger unless the project is cancelled.

“Canada’s Species at Risk Act says the government has a legal responsibility to make sure there are measures to protect at-risk species from threats new projects pose,” she said.

“Under the law, the government cannot justify approving a project that will lead to the extinction of an at-risk species.”

Trans Mountain issued a statement Thursday, saying they are pleased the two First Nations are dropping out of the appeal process.