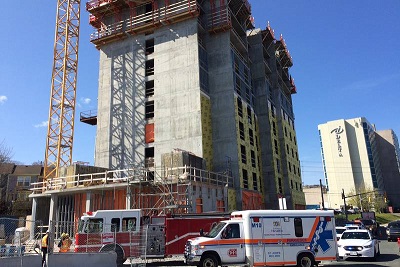 The Royal Newfoundland Constabulary’s criminal investigation division is investigating the circumstances of a fatal workplace accident that occurred at a construction site in downtown St. John’s on Monday afternoon.

A construction worker is reported to have fallen to their death from the building being constructed on the corner of Springdale Street and New Gower Street.

The incident happened just before 4 p.m., and a bystander who happened upon the scene moments after it happened said they saw a co-worker with his safety hard hat clutched to his side and rubbing his head as if in disbelief to what he had witnessed.

Shortly after that, several first-responder units from the St. John’s Regional Fire Department, Eastern Health and the RNC arrived on the scene. As well, investigators with the province’s Occupational Health and Safety (OHS) department were also called to the scene.

Once the individual was pronounced dead at the site, numerous orange tarpaulins were placed on the chain-link security fence by emergency personnel near where the body was on the ground. The body was taken away in a hearse shortly after 5 p.m., escorted by an RNC patrol car.

Speaking with the media gathered at the scene shortly before the body of the deceased was removed from the scene, RNC media relations officer Const. Geoff Higdon said, “Shortly before 4 o’clock we received a 911 call that an individual had fallen from the construction site here behind us on Springdale Street and when the emergency crews arrived on the scene, they did pronounce the individual deceased.

“At this time we haven’t positively identified the individual, so unfortunately I can’t provide any age or sex. Investigators are still on the scene at this point along with our major crime unit interviewing witnesses and anybody who was in the area at the time.

“All hands (first responders/investigators) are on deck and we’re certainly doing our best to triage the situation as it’s unfolding, and, as this happened just over an hour ago, we haven’t been here that long, so we’re still very much in the early stages of the investigation.”

RNC forensic identification officers and other inspectors could be seen on the rooftop near the section from which the worker fell an estimated 100 feet.

Higdon requested that anyone who passed the area at the time of the incident contact the RNC at 729-8000.

Continue reading in The Telegram