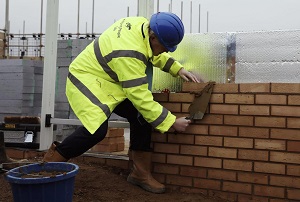 Fascinating story of a bricklaying robot

Bricklaying is one of the most ancient crafts around, one that hasn’t — as Jonathan Waldman puts it — changed much since “man crawled out of the muck.”

In 2006, two guys in upstate New York came up with an idea that they hoped would revolutionize the industry: They would build a robot capable of doing the back-breaking work that people had been doing for millennia. Nine years, and many, many experiments and failures later, they had a version of the robot that construction companies thought might be worth buying.

Before founding their company, Construction Robotics, Scott Peters was an engineer working on fuel cells at General Motors. His soon-to-be father-in-law, Nate Podkaminer, was an architect working as a project manager for a large construction firm.

Together, they conceived the idea of the robot they called SAM — for “semi-automated mason” — and began developing it.

Waldman’s “SAM: One Robot, a Dozen Engineers, and the Race to Revolutionize the Way We Build” is a fascinating account that follows the process from twinkle-in-the-eye to workable result on an almost month-by-month basis. It’s a story with enough twists and turns and surprising conflict to engage even those who have never looked closely at a brick, or wanted to.

It turns out there are reasons why robotics hasn’t entered the construction industry to any great extent. Though construction is a huge industry, it also is a deeply conservative one, “famously stubborn in its adoption of new technology,” Waldman writes.

It also takes place not in the “clear, climate-controlled space” where robots thrive, but “in the wild, where nothing was fixed or level or clean.”

Although the process of developing a working robot was frustrating for those involved, those struggles make for lively reading.