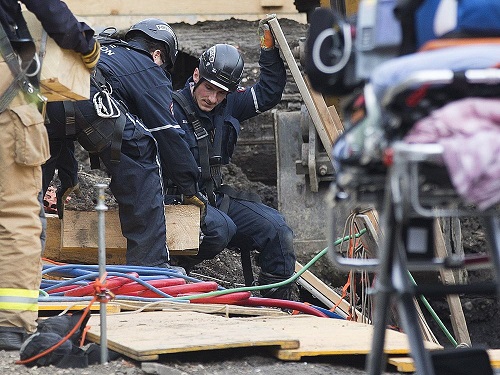 An excavation company director was sentenced to four months behind bars for his part in the death of a day labourer crushed in a trench collapse in 2015.

“He got four months for a life,” Dennis Tomyn, the dead worker’s brother, said outside court Wednesday.

Reading from an agreed statement of facts, Judge Michelle Doyle said Brian Frederick Tomyn, 55 — known by friends and family as Fred — was hired as a day labourer working for cash by Sukhwinder Nagra to dig a trench behind a home development at 10746 123 St. and install a new water and sewer connection on April 28, 2015.

April 28 is the National Day of Mourning for workers killed or injured on the job.

Nagra — who had no prior training in construction or excavation — dug a deep trench using a backhoe before sending Tomyn down to connect the pipes.

Nagra earlier plead guilty to failing to take reasonable care to protect Tomyn’s health and safety under the Occupational Health and Safety Act, a charge that carries a maximum fine of $500,000 or six months in jail for a first offence.

Sahib Contracting Inc. also entered a guilty plea for failing to ensure as far as reasonably possible the health and safety of a worker.