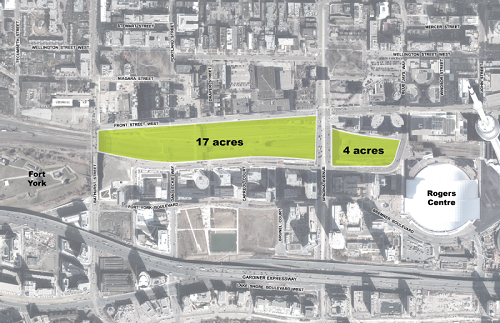 The plan for a signature park backed by Mayor John Tory over the downtown rail corridor is now estimated to cost $1.66 billion.

City staff are looking to push forward with design of the 21-acre (8.5-hectare) park, which is now at a very preliminary stage, saying a financing plan could see charges the city collects from new development and funds already collected from developers pay a significant portion of the costs. The current timeline projects construction some time beyond 2019.

But on Tuesday, staff would not discuss details of how much the different financing methods being considered could potentially raise. The strategy relies, at least in part, on contributions from local businesses and corporations that are not yet secured and have not yet been explored.

“The importance of Rail Deck Park is thinking about the city 25 years from now,” said acting chief planner Gregg Lintern. “We’ve got to imagine a city where a substantially increased number of people are going to live here, perhaps double the number of people we’ve got in the downtown right now. We’ve got to think about the livability for those people.”

Staff have identified a “priority phase 1” option for the park that could be built first — a 9.5-acre stretch from Spadina Ave. to the existing Puente de Luz pedestrian bridge, at a cost of $872 million. This would have a significant impact in a downtown core currently lacking in parks, staff say.

Staff believe a significant portion of the funds can be collected from ongoing development.

Provincial legislation allows cities such as Toronto to collect land, or cash in lieu of land, for the creation and development of parks from developers seeking to build beyond the allowed height and density of a site.

Staff are currently reassessing the cap on the rates developers are charged to see if more funds could be raised through that process during an unprecedented development boom in the city.