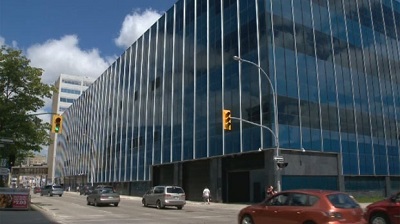 An engineering consulting firm being sued by the City of Winnipeg for alleged mistakes in design and construction of the city’s police headquarters denies the allegations, and has launched its own suit against the project’s construction firm.

The construction firm, Caspian Projects Inc., is also being sued by the city over the $214-million project, and it has fired back with a suit against the city.

In a statement of defence filed on Monday, engineering firm Adjeleian Allen Rubeli Ltd., known as AAR, says it’s not responsible for any loss or damage to the city resulting from the headquarters.

When the city filed its lawsuit in May, Winnipeg chief administrative officer Doug McNeil estimated the cost of dealing with all the deficencies in the building would be “north of $10 million.”

The city’s statement of claim describes dozens of shortcomings, including water leaks, a broken concrete floor, drainage issues, inadequate air flow, insufficient asbestos abatement, a lack of temperature control and no catwalk on the fifth floor.

A deteriorated structural slab and dislodged concrete are compromising the building’s structural integrity, it adds.

None of the allegations in any of the suits has been proven in court.

In its statement of defence, AAR says there were no defects or deficiencies in the design work it completed for the project.

It also alleges the city initially contracted Caspian and ordered it to start working on the project, despite knowing the design wasn’t yet complete.

The firm says Caspian and the city met and agreed on the contract price without AAR’s participation.