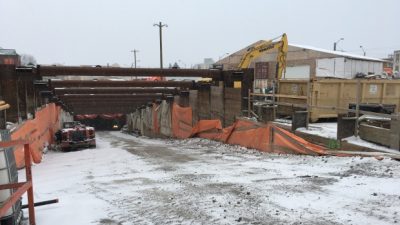 Occupational Health & Safety officials did the correct thing and shut this project down in early December. I respect the work these people do, especially when they step up to make tough decisions that save lives.

The construction industry has one of the highest rates of workplace injuries and in some cases death. We need more OH&S officers on construction projects but unfortunately budgets do not fulfill the mandate.

Digging on Edmonton’s Valley Line LRT tunnels could resume within the next couple of days after a stop-work order was lifted Monday by Alberta Occupational Health and Safety.

The order, which had been in effect since Dec. 4, brought the project to a halt while additional safety measures were put in place.

It has meant there has been no activity at the entrance to the tunnels in the area of 102nd Avenue and 95th Street since that time.

“We’re in the process of getting ready to go back to tunnelling for the LRT tunnels,” said Dean Heuman with TransEd, the partnership building the project.

Occupational Health and Safety officers ordered work to stop on the two tunnels being constructed for future northbound and southbound trains after a spot check.

They called for additional safety procedures to protect workers in the event of an emergency such as a cave-in down in the tunnels, which are up to 20 metres underground.

“It’s been a good exercise with (Occupational Health and Safety) and we worked together and have come up with a reasonable solution,” Heuman said Tuesday.

The specific concern about providing safety areas to workers in the tunnels during any possible collapse has been addressed, he explained.

“We have some specialty tents that allow for some additional safety places,” Heuman said. “The tents are right down where we are digging so they continually move along where we’re digging.”

In addition to the reinforced tents, TransEd has also arranged for more oxygen tanks and breathing apparatus to be available in the tunnels which are six metres in diameter he said.