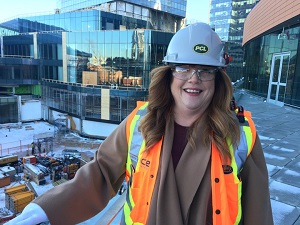 From Glen Scott’s corner office on the 22nd floor of the Bell Tower, he has a front row seat to the progress in Edmonton’s Ice District.

“As you can see we’re inching along out there,” said the president of Katz Group Real Estate.

Outside his window construction continues on a mixed-use skyscraper, which includes the new JW Marriott hotel and the residential condo part of the development above called Legends Residences, which is still being completed.

Scott says by the end of January or first week of February they hope to have a topping off ceremony for the skyscraper.

Next door, at what will be the tallest building in Western Canada, Scott is ready to mark another construction milestone.

Work on the Stantec Tower is moving to the residential portion of what will be a 66-floor building, which will now be growing by about a floor per week.

“It’s pretty exciting, we’re making some pretty good progress,” Scott said.
When Kathleen McCabe, vice president of global real estate for Stantec, tours what will be the building’s daycare, main lobby and massive food hall, she can see that progress. The company will be able to consolidate the design firm’s 1,500 local employees from three locations into one.
Keep reading on CBC News
TweetShareLinkedIn
Submit YOUR Content ❯