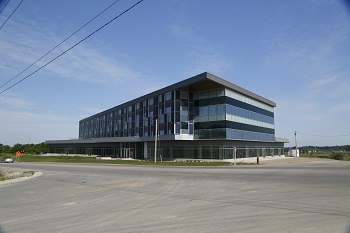 A modern net-zero development, a warehouse redeveloped for a tech company and a historic courthouse were recognize in the 2017 Don Smith Commercial Building Awards.

The reception and awards, held every two years, recognize the top commercial, industrial, multifamily and community buildings across the London region.

The awards are named after Don Smith, co-founder of EllisDon, the global construction giant founded in London.

This year’s awards run the gamut.

There’s the Cube, an old warehouse at York and Talbot streets, refitted by York Developments as the headquarters of the digital company Arcane. Then, there’s West 5, the ultra-modern, environmental showpiece from Sifton Properties.

This year’s program features a new legacy award, which recognizes a building of any type that is unique or significant to the London and St. Thomas jurisdiction.

The inaugural winners of that award are the Elgin County courthouse and the London Life building. The awards are sponsored by the London and St. Thomas Association of Realtors. The winners were announced Monday.