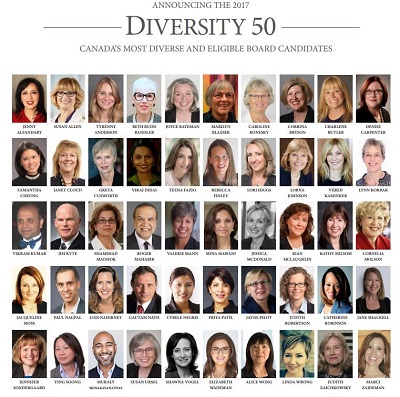 A big #shoutout to a good friend of mine that made this exclusive list as well as the other candidates:

“Study after study has shown that diversity increases a company’s bottom line and leads to better decision making,” says Sherri Stevens, President & CEO of PhaseNyne. “The Diversity 50 list serves as a much-needed resource that highlights board-ready candidates that have the knowledge, skills, and experience to make an impact in corporate Canada. By giving corporate boards the tools they need to locate these successful individuals, organizations can improve their performance for the benefit of their customers, employers, shareholders and, in the process, for Canada as a whole.”

Now in its sixth year of production, Diversity 50 is an initiative supporting PhaseNyne’s mandate to increase representation of such considerations as gender, visible minorities, Indigenous persons, people with disabilities, and members of the LGBTQ community at the boardroom of Canada’s 500 largest organizations. The goal of the list is to bring together and turn the spotlight on qualified candidates who are typically overlooked or unknown to recruiters and Nominating and Governance Committees.

“A truly inclusive organization is grounded in a culture where all employees connect, belong, and grow. And to bring inclusion to life, the organization’s leaders and those that govern it must unite under a shared purpose that goes beyond economic returns,” says Miyo Yamashita, Managing Partner, Talent & Workplace, Deloitte Canada, a co-presenting partner of Diversity 50. “Now, more than ever, Canada needs a diversity of backgrounds, experiences, and thoughts at the helm of its trusted organizations to help unleash the full potential of its people and drive inclusive growth.”

This year, the Diversity 50 list is comprised of 44 females, 6 males, 15 visible minorities, 2 individuals that identify as members of the LGBTQ Community and 1 individual that identifies as a person with a disability. This year’s candidates hail from Canada’s largest cities, spread across six provinces: Ontario (66%), British Columbia (16%), Alberta (8%), Quebec (4%), Manitoba (2%), and Saskatchewan (2%), and 2% are expats.

About PhaseNyne
PhaseNyne (parent company of Women’s Executive Network – WXN, Canadian Board Diversity Council – CBDC, and Stevens Resource Group – SRG) provides the tools and resources to help corporate boards boost their diversity efforts, including the annual Diversity 50 list, which features a cohort of 50 diverse, qualified candidates ready for corporate board director appointments. Additionally, PhaseNyne’s Get On Board Governance Education Program is designed to complement existing director education programs, equipping board-ready, high-potential diverse candidates with the tools to pursue board placement. The company is also known for their Annual Report Card (ARC), which is produced in collaboration with the Conference Board of Canada and tracks and examines diversity in Canada’s boardrooms.