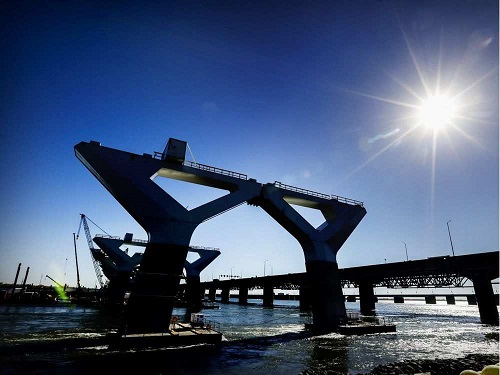 Despite reports of shoddy materials being shipped, Daniel Genest, the director of co-ordination for the new Champlain Bridge, said every piece meets strict standards of quality.

With 361 days to go before the new $4.2-billion bridge is due to be handed over to the federal government, Genest spent Monday meeting reporters to respond to a report in the Journal de Montréal stating that incomplete or missing welds, misaligned holes on steel parts and cracked or porous metal plates have been detected during the course of construction. Most of the problems were found with support beams from a firm identified in the report as Tecade, which is based in Spain.

With most of the materials being built in factories in Trois-Rivières, Quebec City, Terrebonne and Madrid, Spain, Genest said every piece that is sent to the builders of the Champlain Bridge is inspected by engineers who work for the subcontractors. Signature on the St. Lawrence (SSL), the group building the bridge, also has inspectors at each of the factories doing quality assurance, which consists of visual inspections and spot tests. The project also has an independent engineer hired by Infrastructure Canada and SSL to do further inspections. Infrastructure Canada can also take some of the materials to its own lab to test for quality.

Engineers and subcontractors quoted anonymously in the report say that while problems on a project the size of the bridge construction are almost inevitable, the number of defects detected thus far is surprising.