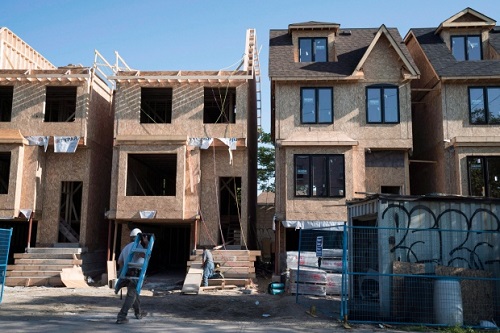 The hottest housing market in the world is facing a reckoning.

Toronto-area land prices have gotten so high that developers are struggling to build new homes that people can afford. Buyers are no longer lining up, despite discounts and incentives.

The cost of land has nearly tripled in some areas the past five years, according to Altus Group Ltd. It now accounts for roughly half the price of a new home. In 2011, it was a little more than a third.

“It’s a real turn,” said Peter Comyns of PMA Brethour Realty Group. In June, it took Comyns just two days to find 200 buyers for yet-to-be-built homes in a Toronto suburb. Two weeks ago, 50 were available. His team sold about 12.

A convergence of factors — government rules aimed at reshaping Ontario’s housing market, tougher mortgage guidelines, a shortage of land — is pushing against the housing bubble in the Toronto area, where new-home prices have risen since 2009.

One result is pinched supply. About 2,600 new homes were available for purchase in the Toronto area at the end of September, close to a record low and down from about 15,000 a decade ago.

Under Ontario’s new growth plan, 17,200 hectares (42,500 acres) are available for residential construction — much less than the 100,000 hectares the province says there are, according to Malone Given Parsons Ltd., a development consultant based in Markham, Ontario.

“There’s just no land for development,’’ said Matthew Cory, a principal at the firm. “And the pieces that are available are struggling to get to development because of lengthy and complicated policies.’’

Making houses sprout from undeveloped land is also taking longer as government efforts to shape communities bear fruit. Builders are scrambling to comply with a revamped regional plan called Places to Grow that prioritizes denser properties around transportation hubs. That’s in addition to the usual responsibilities, such as rezoning and connecting tracts to infrastructure like roads, power and water, and winning approval from city councils.