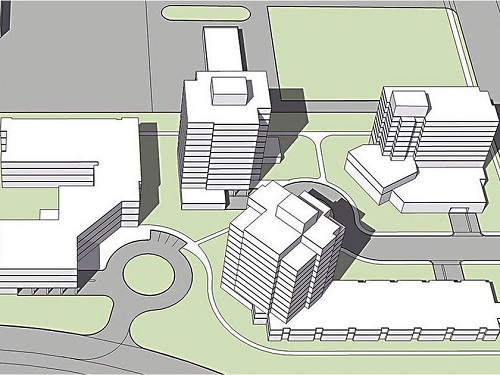 A local developer aims to build a new seniors’ assisted living complex, a hotel and two mid-rise condominium buildings next to the Eaux Claires transit centre in north Edmonton.

Entrepreneur Sadru Nazarali’s numbered company purchased land at 9503-157 Ave. 12 years ago with the intent of building seniors’ housing that would allow older adults to age in place, he said.

“This project was not done in isolation, but (in) complete consultation with city’s departments, as well as the neighbourhood. It is really important for us that we listen to the neighbours,” Nazarali said on Saturday.

The land is currently zoned as agricultural, and sits north of the Belle Rive Ismaili place of worship and the Clearwater Plaza shopping complex.

A 165-unit, five-storey housing complex for seniors would sit on the south end of the parcel, and is Nazarali’s priority. He’d like to have shovels in the ground within a year of gaining approvals from the city.

For the rest of the land, he may enter into joint venture projects, or sell the land to developers. His proposal includes a 12-storey hotel, a 14-storey condominium building with 103 units, and a second 14-storey condo building connected to row housing at the base, with a total of 112 units. About 85 per cent of the parking for residents would be underground, says a letter sent to neighbours in August.

Each structure could cost about $40 million, Nazarali said.

He hopes the project’s proximity to the transit station and a grocery store will attract both seniors and families.