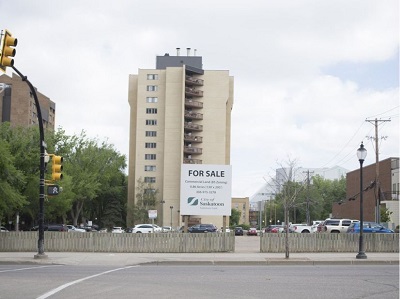 As reported in the Saskatoon StarPhoenix, what could be Saskatoon’s largest single residential development project has been proposed for a vacant lot in the City Park neighbourhood, according to a city report.

Saskatoon Land’s annual report says two 23-storey towers are planned for a former police parking lot at the corner of Fifth Avenue and 25th Street. The lot was purchased by Saskatoon’s Baydo Development Corporation for $4 million in 2018, according to city documents.

Plans include approximately 364 rental units and four levels of underground parking, according to the report. The site, which covers nearly one acre, was sold last year with the condition that the project begin within three years. The report adds work could begin this year.

“Combined 46 storeys would make this the largest residential project (in Saskatoon),” Alan Wallace, the City of Saskatoon’s former director of planning development, said Friday in a text message. “Great location next to (bus rapid transit) route.”

Inquiries for Baydo from the Saskatoon StarPhoenix were directed to Kaveri Braid with the Earnscliffe Strategy Group. Braid on Friday declined comment on plans for the site.

The City of Saskatoon put the former Saskatoon Police Service parking lot up for sale at the start of 2017 for $4.1 million.

With about 364 units in two 23-storey towers, the Baydo development would be larger than any of the proposed infill projects, such as the one by North Prairie Developments in Varsity View (171 units) and by Victory Majors Development Corp. in Nutana (112 units).

City of Saskatoon officials declined to comment on whether the project would be the city’s largest of its kind.

A project of that magnitude would would help the city achieve infill goals in the downtown core.