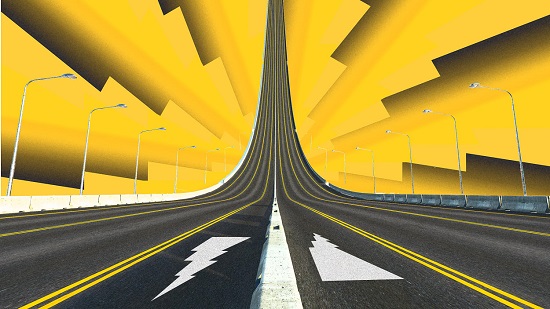 Over the next two years, they plan to embed technology in the pavement that can charge electric vehicles while they’re being driven. The wireless system will be the first U.S. test of so-called inductive charging on public roadways, according to the Michigan Department of Transportation.

“We’re the auto capital. We continue to push technology advancements,” said Michele Mueller, a senior project manager at the agency.

In some other states, including Florida, Indiana, Pennsylvania, and Utah, officials also plan to test inductive charging on public roads in the next several years.

“This is a great solution to a problem we have today of how to get to zero emissions,” said Tallis Blalack, managing director of the ASPIRE Engineering Research Center headquartered at Utah State University, which focuses on electric vehicle infrastructure. “If we do this correctly, we can decrease the costs of transportation for everyone.”

Electromagnetic inductive charging is common in everyday life—setting a mobile phone on a wireless charger uses similar technology. On roadways, coils embedded in the pavement transfer magnetic energy to a receiver mounted beneath an electric vehicle to charge its battery wirelessly.