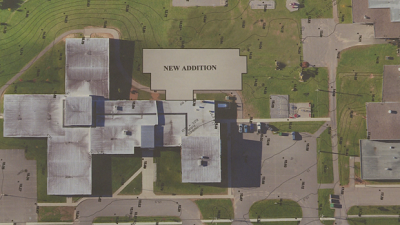 Detailed plans for a multi-million dollar expansion at Stratford Elementary School to address overcrowding in the town’s two schools were unveiled Tuesday.

The two-storey addition on the back of the building will likely allow one or half a grade to move from Glen Stewart Primary to Stratford Elementary — which is right next door — and accommodate growth in the community says Parker Grimmer, director of the Public Schools Branch.

He said the number of students at Stratford Elementary is in the 400s and he could see up to 200 moving over when the project is complete.

“The idea is that there would be room for expansion for several classrooms in addition to the students that would come over in the initial move,” Grimmer said.

There will be another gym and music room along with more space for planning, guidance counselors, EAL students, break out rooms, washrooms and gender neutral washrooms.

Grimmer said there is also the possibility of a court yard or outdoor learning space. Classrooms will be the same size as current ones and the addition will be accessible with an elevator or stairs.