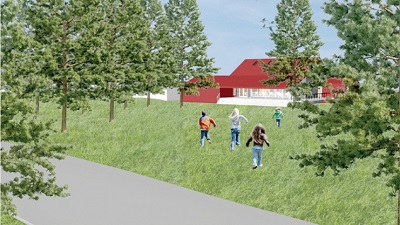 A kitchen with commercial equipment, plenty of windows, increased seating capacity – and a red roof – were some of the highlights contained in the preliminary design of the Coopers Green Hall upgrade that was shared at an open house on March 15.

“The concept is really to have the main community space be able to connect the water and the park together,” said Craig Burns, architect with Principle Architecture. To do that, the design includes decking on both sides of the building, glazing and large windows. Two support blocks consisting of a kitchen, washrooms, a mechanical room and storage are located on diagonals from the main room for a combined floor space of 2,880 square feet (267.5 square metres). If the upgrade occurs, the building will be raised at least two feet to protect against storm surges and sea level rise.

Principle Architecture was hired as the Sunshine Coast Regional District’s (SCRD) design partner in 2017, the same year a task force was appointed to spearhead the project. This is the first time the design was made available to the public.

So far, no plans are in the works to get green building certification, though Burns said they will likely suggest integrating the BC Energy Step Code in the next design phase. “That’ll be probably the measurement that is most relevant to today’s design,” Burns said. He said LEED is another way of evaluating sustainable design, but isn’t always cost-effective for a community building. “It’s absolutely on our radar, but it falls to the next phase of design.”

The hall will be located on the same site as the existing hall at Coopers Green Park, with additional parking proposed along Fisherman and Redrooffs Road to support the increased capacity of the hall, which can seat up to 176 people. It has also been designed to work as a performing arts venue.
Keep reading on CoastReporter.net