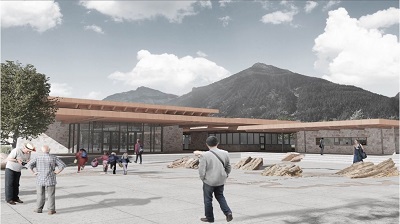 The new visitor centre in the centre of  Waterton’s Townsite will consist of three craftsman-style, flat roofed, wood and stone buildings. One will be an interpretive centre, the second, an administrative area, and the third – public washrooms.

It will also feature a town plaza that will connect to the commercial district, a “natural materials” playground for children and large overhangs to provide shelter and relaxation areas for visitors.

Parks Canada released their choice January 12th indicating that it was also the most popular design featured at their previous open houses.

There will also be year-round programming at the interpretive centre, including displays of Blackfoot history, traditions, culture and contributions to the park itself.

There has been some very vocal opposition to the new location, but Parks Canada says the former visitor centre that burned down in the Kenow Fire, was not able to accommodate the more than 500,000 visitors it received each year.