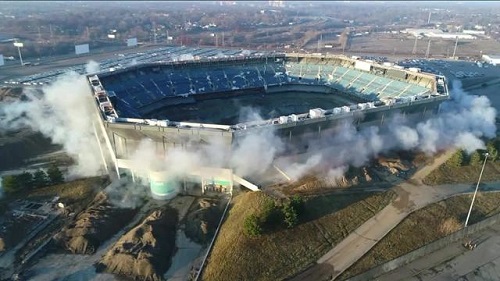 A series of thunderous detonations rocked the Pontiac Silverdome early Sunday morning, sending up clouds of smoke and thrilling a spectator crowd of hundreds out to watch the start of the stadium’s demolition.

But as the smoke cleared, a problem became apparent: the Silverdome was intact.

Officials with the demolition contractor, Detroit-based Adamo Group, confirmed that the explosions failed to bring down the steel columns supporting the Silverdome’s upper level. The detonations — and anticipated collapse of the upper level — were to be the opening round for a year-long demolition project, which will mostly be done with hydraulic excavators.

Roughly 10% of the explosive charges did not detonate due to a wiring issue, said Rick Cuppetilli, executive vice president with Adamo. These unexploded charges were set up in eight key locations around the Silverdome. The precise cause of the wiring issue remained unclear early Sunday afternoon.

“There’s wires separated somewhere,” Cuppetilli said. “We’ve researched it, we haven’t found it yet, we’re going to continue research, but it’s not coming down today.”

Cuppetilli said the columns could be taken out later this week — perhaps as early as Monday — by detonating the unexploded charges or by using excavators.