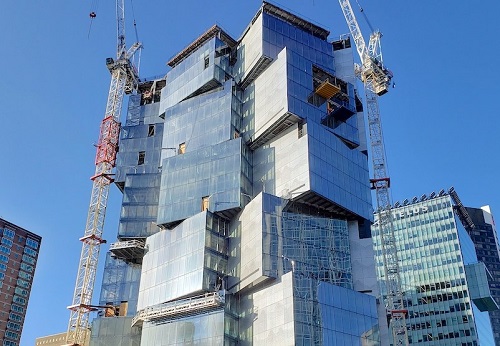 One of the most intriguing tower developments under construction in downtown Vancouver recently passed a major milestone.

Deloitte Summit office tower at 400 West Georgia Street has topped out, achieving its full height of 301 ft with 24 storeys.

The building replaces the former Budget car rental lot at the southwest corner of the intersection of Homer and West Georgia streets, just across from the Vancouver Public Library’s Central Branch.

Developed by Westbank, and designed by Tokyo-based OSO and Vancouver-based Merrick Architecture, the tower’s form is inspired by the shape of a Japanese lantern, composed of a system of four-storey cubes stacked around a central concrete core.

The building’s exterior will be clad with glass and greenery. A significant outdoor amenity space with ample landscaping is also planned for the rooftop.

The pace of construction has been relatively quick as the building uses steel for its structure instead of concrete. Over 5,000 metric tonnes of steel was raised and fixed into place for the tower.

The project’s rezoning application was approved by Vancouver City Council in February 2018.