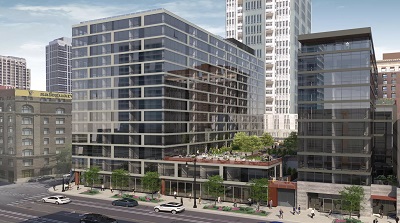 Developer Clifton Blake Group is planning an 8 storey building designed by Studio JCI. The project would also include 233.9 Metres of retail space with a total of 30 rental residential units located at 1924 Eglinton Avenue West in midtown Toronto per Urban Toronto.

The units will consist of the following:

There will be a combined 117 metres of amenity spaces which will be divided between 60.8 metres of indoor space and 56.2 metres of outdoor space. Since the building is in close proximity to a higher order of transit stations, only three parking spaces are proposed, versus the 27 required by the City. 31 bicycle parking spots would also be provided.

According to BlogTO, Eglinton Avenue once felt like the end of civilization in Toronto at around the turn of the 20th century. But, development in the years to follow was swift and by the 1930’s, the character of the street as a retail strip around Yonge and westward was already well in place.

Eglinton’s big growth spurt took place between 1930 and 1960. At that time, the street was widened to its current size and bridges were built across the Don Valley.

Eglinton saw a big boon in the early 1990’s and by 1994, a subway was under construction until Mike Harris replaced Bob Rae as Ontario Premier and killed the project.

After a 25 year wait, construction is once again underway for rapid transit in the form of the Crosstown LRT. Due to this, you can bet that the street will once again undergo significant change.