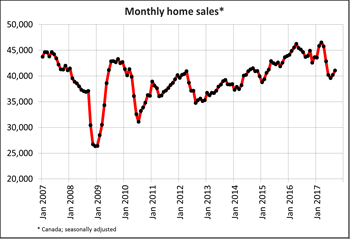 Ottawa, ON, November 15, 2017 – According to statistics released today by The Canadian Real Estate Association (CREA), national home sales posted a modest monthly increase in October but remain below levels recorded one year ago.

Home sales via Canadian MLS® Systems edged up 0.9% in October 2017 on the heels of monthly increases in August and September, but remained almost 11% below the record set in March. (Chart A)

Activity in October was up from the previous month in about half of all local markets, led by the Greater Toronto Area (GTA) and the Fraser Valley, together with a number of housing markets in the Greater Golden Horseshoe region.

Actual (not seasonally adjusted) activity was down 4.3% in October 2017, extending year-over-year declines to seven consecutive months. Sales were down from year-ago levels in slightly more than half of all local markets, led overwhelmingly by the GTA and nearby cities.