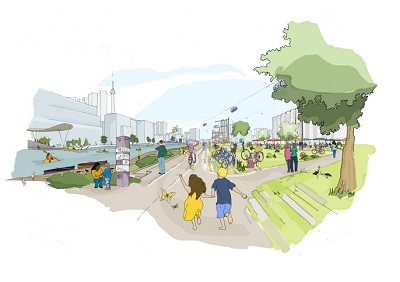 The controversy over Google’s futuristic plans for Toronto

Sidewalk Labs, a Google company aiming to branch out into city planning, has come up with a futuristic vision for a chunk of the lakefront in Canada’s biggest city.

The plan for Quayside, a data-oriented high-tech neighbourhood in the city’s east end, has attracted a lot of attention because it seems to be “a built-form version of Facebook,” in the words of urban affairs expert John Lorinc.

But the proposed project’s risks go far beyond Google’s data collection and data use.

As an expert on the governance of urban development, with particular expertise in the growing use of public-private partnerships, I fear that the raging debate between “smart city” advocates and critics of big data may prevent Canadians from appreciating that the Google plan may involve software, but it’s a city plan, not an app.

As such, it represents a radical departure from the principles that have guided city planning in Canada since citizen participation and accountability came to the fore in the era of Jane Jacobs, a renowned Canadian-American urban planner.

Turning large areas over to private corporations so that they can not only build but even plan and control neighbourhoods or towns has happened in many Asian cities: Manila, Singapore and Hanoi have all witnessed the emergence of exclusive “Urban Integrated Megaprojects.” They may not have data sensors everywhere, but they otherwise resemble the Sidewalk Labs’ plan for Toronto.

Privatized planning also exists in democratic Western countries. In the Margaret Thatcher era, London saw the creation of several “Urban Development Corporations” designed specifically to go over the heads of local city councils, which were often dominated by Labour politicians opposed to such entities.