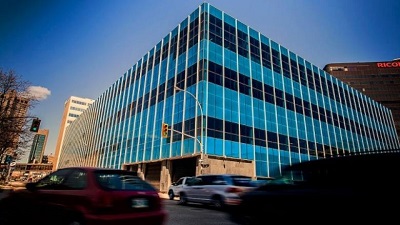 The contractor that built the downtown Winnipeg police headquarters, and is the subject of a lawsuit launched by the City of Winnipeg last month, is firing back with a multimillion-dollar lawsuit blaming the city and its employees for delays in the project, which it says resulted in additional costs to the company.

In a statement of defence filed Thursday afternoon, Caspian Projects Inc. denied allegations made by the city in a May lawsuit that claimed the contractor’s work on the police HQ resulted in a number of deficiencies.

Caspian countered that claim by saying it “exercised reasonable skill, care and diligence at all material times,” and argued the city’s own contract said Caspian wouldn’t be held at fault for any problems with the design.

“Caspian is not responsible for any aspect of the design of the project” and the contract says “the costs associated with any defect in design shall not be borne by Caspian,” said the statement of defence.

Last month, the city filed a civil suit against Caspian and engineering firm Adjeleian Allen Rubeli Ltd. — the company that designed the police HQ — alleging more than 40 deficiencies were discovered in the building after police moved into it two years ago.

Those are problems City of Winnipeg CAO Doug McNeil estimated would cost “north of $10 million” to fix.

The city’s lawsuit alleged the building lacks adequate fire protection, has improper drainage and has a deteriorating structural slab that wasn’t addressed during the three-year construction project.

In its statement of defence, Caspian said any loss or damage suffered by the city was due to the city’s own negligence, and that the contract it signed never included the replacement of existing concrete floor slabs or asbestos removal.

Caspian said the police headquarters building was virtually finished in August 2014. The city was prepared to take possession of the building after its inspectors, who did a walk through, identified only a couple of minor deficiencies which were corrected overnight, Capsian said.

But days before that happened heavy rain flooded parts of the building, causing damage and delaying completion of the project. Caspian said the city signed off on the contractor’s work in the summer of 2016, which was documented in a report to the city’s finance committee.