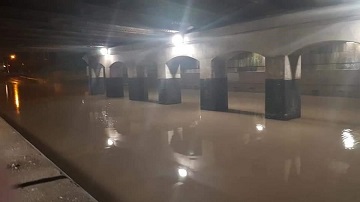 Sault Ste. Marie City Council is expected to award a contract on Monday for additional repairs to the problematic Wellington Street underpass.

The job is expected to go to Carlington Construction Inc. from Hamilton, which had the lowest among five bids at $346,996.

George Stone & Sons originally had the second-lowest bid, but sharp eyes at the civic centre noticed a $622,100 arithmetic error in the Stone bid, which was recalculated to $952,551.

The Stone & Sons miscalcuation was itself larger than any of the five tenders submitted.

A recent biennial bridge inspection found concrete repairs were needed to the centre support piers and the southwest parapet wall of the CN Rail underpass.

Delaminated concrete will be removed from the centre support columns, which will then be sandblasted and refaced, with possible replacement of corroded reinforcing steel.

The parapet wall, which separates the sidewalk from the roadway, was damaged when it was struck by a vehicle.

Under a 1960 agreement, costs to maintain the bridge are shared equally between the city and the railway.