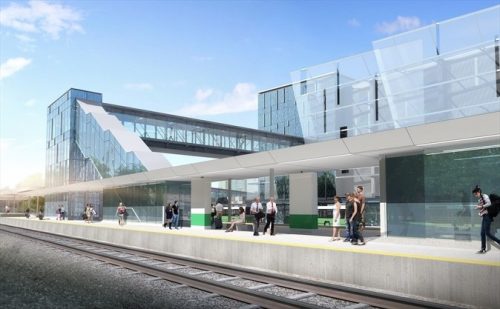 The contract is valued at $128.4 million, which reflects the substantial completion payment.

Members of the EllisDon team include:

The selection of EllisDon is the result of an open, fair and competitive procurement process overseen by a third party fairness advisor.

Construction will begin immediately, with an expected substantial completion date for summer 2020. At the peak of construction, EllisDon anticipates approximately 150 workers on-site, the majority which will come from the Greater Toronto Area.

“Cooksville GO Station is another example of the work our government is doing to make people’s commutes faster, more convenient and better integrated with transit systems across the region. Increasing commuter’s transportation choices in Peel, Mississauga and across the GTHA helps us manage congestion and reduce emissions on our roads while we improve our economy by connecting people to jobs and opportunities.”
Steven Del Duca, Minister of Transportation

“Improving commute times and easing congestion are critical for families and businesses, and a priority for our government. I look forward to the completion of the Cooksville GO Station project, which directly supports local jobs and a strong economy.”
Bob Chiarelli, Minister of Infrastructure

“With this announcement, Metrolinx has identified a contractor for the Cooksville GO Station redevelopment project, which includes a new station building, multi-level parking structure, station upgrades, and a connection to the future Hurontario LRT. Metrolinx is pleased to be moving forward with yet another project that will bring faster, more frequent service to the City of Mississauga, Peel Region, and the Greater Toronto and Hamilton Area.”
Phil Verster, President and CEO, Metrolinx

“IO is proud to partner with Metrolinx and EllisDon on the Cooksville Station Redevelopment project, which when completed, will further enhance rail service in the Greater Toronto and Hamilton Area.”
Ehren Cory, President and CEO, Infrastructure Ontario