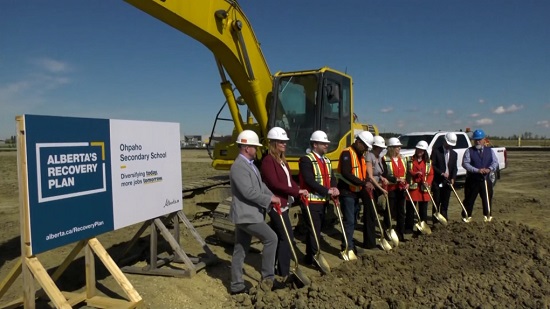 Five new high schools in Alberta are on track to open to students in September 2024. The announcement was made on Thursday by Infrastructure Minister Prasad Panda at the future site of Ohpaho School in Leduc.

The five schools are being built under a Public Private Partnership or P3 model.

Concert-Bird Partners will design, finance, and build the schools. They will also maintain them for 30 years.

“Edmonton has massive issues with its P3 schools,” said Cam Heenan, NDP candidate for Leduc-Beaumont. “At Bessie Nichols School, the private contractor would not give school administration control of the thermostat on some of the coldest days of the year citing cost concerns.

“At Johnny Bright Elementary School, students were forced to walk through mud pits that could be as high as their knees because the contractor refused to address drainage issues” Heenan added.

“After this failed experiment, the PCs abandoned P3s.”

Back in 2014 Alberta’s then Progressive Conservative government sidelined a plan to build 19 new schools using the P3 model, saying it would be cheaper to build the schools themselves.