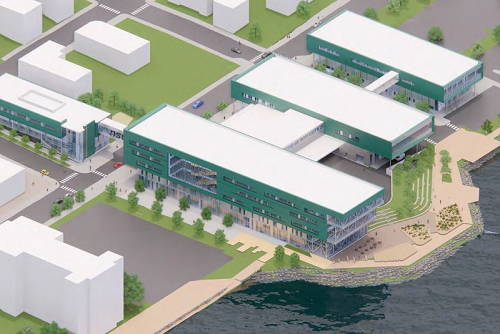 A glimpse into the future of Sydney’s downtown core was unveiled on Friday when the provincial government unveiled conceptual drawings of the new Marconi Campus.

Construction of the Nova Scotia Community College facility that will feature a pedway crossing above the Esplanade is set to begin this month.

“It’s a very exciting time for our community to be able to have a new facility with state-of-the-art learning spaces, community spaces and connections to the community that can be enhanced and improved based on our new location,” said Marconi Campus principal Fred Tilley.

Last month, NSCC issued a tender to start the construction phase of the project. The tender is expected to be awarded within two weeks. Meanwhile, other construction tenders will be issued over the next 18 months.

Tilley wasn’t surprised with the timing of construction as the goal is to have the new facility open for September 2024.

“In order to hit that timing, we need to get started right away,” said Tilley. “I think it’s going to bring that modern approach, a brand-new beautiful building and landscaping that will fit in quite nicely with the lay of the land and the existing surroundings.”

In August 2019, the province announced the location for the new facility, which will encompass the waterside of the Esplanade in Sydney from Falmouth to Crescent streets.