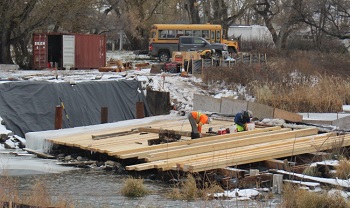 Repairs are going according to schedule for one Swift Current landmark.

The CPR Wier has called the Swift Current Creek home for over 100 years, and thanks to its latest round of repairs, hopes to reside there for the next 100.

Mitch Minken, general manager of infrastructure and operations with the City of Swift Current, said that the first half of the project would be completed by the end of the week.

Construction began on the first half of the structure at the end of September.

He added that the project’s pace is lining up with their schedule.

“They’ll move on to the second half [of construction,) with completion expected around the end of November, which is right on target.”

Repairs were needed on much of the structure’s construction, including the underlying foundation, and the top boards which the water runs on.

Minken said that other than a hiccup at the start of the project, it has been smooth sailing.

“We ran into some issues at the front once we got it opened up and got a better understanding of what was all there, but since that, we’ve had no surprises, everything is going along as planned.”

The Issues Minken mentioned was extra damage that was discovered once work began, and prompted City Council to budget an additional $350,000 to the project.

Due to it being a historic site, restorative guidelines are in place on the wier.

The wier must stay similar to the original design from 1888.

Minken explained that they did make one change.

“The only real difference from the original design, is the placement of the rock to provide further reinforcement.”

“Within the wood support structure, we’re placing rock in there to provide further reinforcement, but other than that, It’s similar to the original design.”

As cold weather closes in on the area, Minken said that they shouldn’t run into trouble with ice during construction.

Watch the video on SwiftCurrentOnline.com