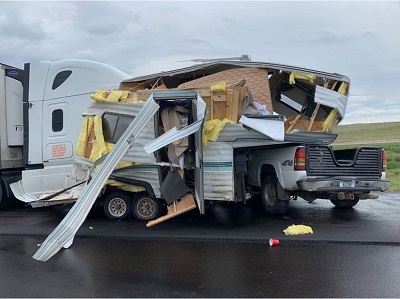 As reported in the Regina Leader-Post, a pair of Montana travellers heading along the Trans-Canada Highway west of Maple Creek say they were obeying the speed limit in a construction zone Sunday afternoon when a semi trailer slammed into the camper behind their pickup truck.

The passenger in the stricken vehicle, who refused to provide a name, said the force of the impact was “huge.”

The Saskatchewan Heavy Construction Association (SHCA) is hoping images of the damage will be forceful enough to persuade motorists — and particularly long-haul truckers — to give more thought to the risks workers face due to speeding in construction zones.

“Folks this is what happens when you don’t pay attention to the signs and SLOW DOWN in the work zone,” the SHCA posted on Facebook, along with a photo of the shattered camper trailer.

Shantel Lipp, the association’s president, said speeding in active work zones is an ongoing problem that shows no sign of abating. Semis are some of the worst offenders, she told the Leader-Post.

“Honestly, it’s just as bad as it’s always been for for our guys,” she said.

“Speeding in these zones, in particular with semis, is a problem,” Lipp added. “And driving a semi through a construction zone is like driving a tank through a sandbox, really. There’s a lot of weight behind those vehicles.”

Saskatchewan Government Insurance (SGI) data shows that police-issued tickets led to 379 convictions in 2017 for drivers exceeding 60 km/h while passing highway workers or designated vehicles. That was higher than in any of the 12 years previous, with convictions varying between 91 in 2005 and 371 in 2013.

A similar category of offence, based on photo speed enforcement, netted 795 drivers exceeding that speed in 2017. That was the second-highest figure after 2013, the year after the offence was created.

SGI has recorded more than 200 collisions in construction zones for every year between 2013 and 2017. There are likely more, since reports only take place in certain circumstances. In 2017, SGI recorded 70 injuries from those collisions. The last fatalities recorded were in 2015, though SGI was not able to confirm whether the victims were workers, drivers or passengers.