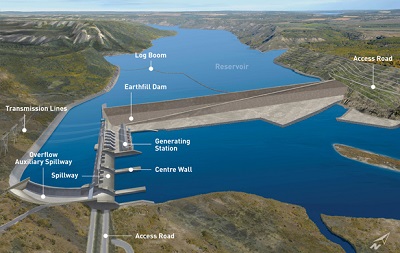 Construction to go ahead on Site C dam, but cost soars to $10.7 billion

The B.C. government had no choice but to complete the Site C hydroelectric dam rather than absorb a $4 billion hit to its bottom line by cancelling the project, which would have jeopardized plans for more spending on schools, hospitals and bridges, Premier John Horgan said Monday.

The price tag for Site C is rising, with the $8.3 billion dam on the Peace River in northeast B.C. now estimated to cost $10.7 billion.

The government estimated the $4 billion cost of terminating Site C would amount to $860 for each B.C. resident. Horgan said he could not ask people to take on such a debt and get nothing in return.

The province also risked a credit downgrade and debt-servicing costs of up to $150 million annually if the project was cancelled. It could also mean a one time, 12 per cent rate hike that would last for a decade, Horgan said.

The decision on the project’s future is one of the first major challenges the minority NDP government has faced since it came to power this summer.

Site C has been at the centre of a polarized debate between politicians, environmentalists, First Nations, labour groups and landowners in the Peace River Valley.

“I can say without hesitation this is a very very divisive issue,” said Horgan, adding he and his wife have argued about the dam.

The decision to complete Site C, which has been under construction for more than two years, caused intense debate in his caucus and cabinet, he said.