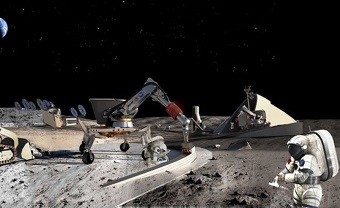 Construction company Caterpillar wants to mine the moon

Caterpillar, one of the largest construction companies in the world, is aiming for a spot on the lunar surface and plans to adapt their range of autonomous and remote-controlled mining equipment for use in space.

NASA previously collaborated with Caterpillar between 2004 and 2013 on a project pairing construction and robotics, NASA spokesperson Clare Kelly to CNBC News. “There are many synergies between what NASA needs to meet exploration goals and Caterpillar technologies used every day on Earth,” she said, though formal plans between Caterpillar and NASA haven’t been announced at this time.

Likely because there’s still a long way to go before the construction, but here’s how moon mining tech could potentially work.

Autonomous construction and mining equipment has been in use for decades. Early pioneers in the field, such as Komatsu, Caterpillar, and John Deere developed operator-less heavy vehicles as early as the 1980s.

After Japan’s Mount Unzen erupted in the early 1990’s, autonomous construction vehicles were used to build dams to control the current of volcanic mudflows in regions too volcanically active for operators to safely work. The technology has been used by corporations like Rio Tinto to mine materials such as gold, copper, and iron ore in remote locations around the world.

Autonomy takes much of the risk out of these often dangerous jobs. Remotely operated and autonomous machines are less prone to operator error, and workers are able to control the vehicles from a safe location. They can accomplish big tasks in difficult-to-reach locations.