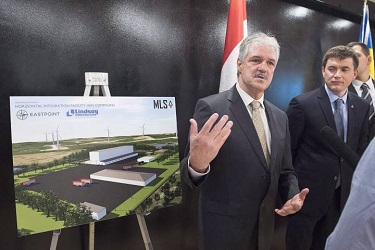 The start date for the construction of Canada’s only commercial spaceport has been pushed back, a developer said following meetings at the proposed rocket launch site near a small fishing community on Nova Scotia’s eastern shore.

Stephen Matier, president and CEO of Maritime Launch Services Ltd., said his firm had hoped to break ground this month on the $200-million project that could eventually see as many as 12 satellites blast into orbit per year.

But Matier now says the launch site in Canso, N.S., likely won’t start being developed until later this year, although he was hesitant to impose any new timeline.

“As part of the process, I try to move things along. But the process is the process. There’s 12 months of data collection. There’s a report that has to be written. There’s a review process that has to happen,” said Matier in a recent phone interview, as he waited to fly back home to New Mexico from Halifax Stanfield International Airport.

The project doesn’t plan to put humans into space, but is rather aimed at attracting consortiums of firms that want to put satellites into orbit for commercial purposes, such as near-Earth imaging.

The project is a private-sector venture, but requires the province’s environmental approvals and other regulatory approvals.

There are still a number of hurdles to overcome before construction can begin, but Matier said good progress has been made.