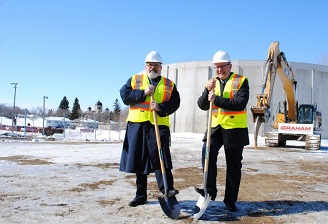 The ground has been broken on a new water reservoir in Prince Albert, a $12 million project to increase the city’s water capacity levels.

Construction on the new reservoir was announced Tuesday. A second, 15-million-litre water reservoir will be built next to the one at the city’s water treatment plant along River Street. The project will be funded under the Clean Water and Wastewater Fund using federal and provincial dollars – $6 million from the federal government and $3 million from the province.

The City of Prince Albert will cover the remaining costs.

Prince Albert Mayor Greg Dionne said the project will increase local water capacity and ensure that enough good, potable water will be on hand should problems with the water supply arise. The Husky oil spill of 2016 was an eye-opening experience for city officials and residents, he said, as supplies were limited and the city’s reserves had a capacity of just a couple days.

Dionne said the city had good discussions with the province following the oil spill to determine what was needed and how the city could access more funding.