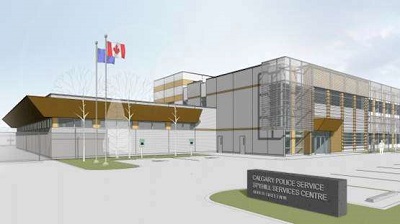 New digs are coming for those arrested by Calgary police.

Shovels are poised to break ground on construction of a new arrest processing unit (APU), the final chapter in ongoing efforts to replace the current facility and a challenging project Calgary police Chief Roger Chaffin said is long overdue.

“One thing we’re working with the community on are concerns around moving prisoners in and out, and how that’s going to work,” he said, speaking to Postmedia earlier this month.

Chaffin said the service expects to move into the new facility — to be built next to the Calgary Remand Centre in the city’s northwest — within two years.

Currently, suspects detained by police are processed at a downtown building officially designated as “Block 40,” an aging city-owned facility sandwiched between the central library and Bow Valley College.

It’s the first stop for anybody taken into custody in Calgary, where suspects are fingerprinted, photographed and lodged in a holding cell.