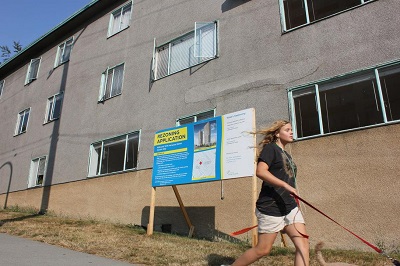 The City of Vancouver is asking the developer of a proposed West End condo building to combine what was two separate playgrounds — one for the market condo portion of the building and another for the social housing — into one, to avoid causing stigma and social isolation.

But with another project offering “social housing” for families who make more than $100,000 and continued renter displacement in the rental-heavy neighbourhood, advocates are still questioning just how well several new developments in Vancouver’s West End will perform at replacing housing for low- and mid-income residents.

A wave of new development in the rental-heavy neighbourhood has been spurred by new density allowed by the West End plan, passed in 2013. Each new condo development is required to include social housing and “low-end-of-market” rental to make up for the older apartment buildings that will be demolished to build the new towers.

“It’s not recognizable as social housing to anyone who works in social housing,” said Quentin Wright, executive director of Mole Hill Housing Society.

The separate playgrounds at Strand and Intracorp’s project planned for Burnaby and Thurlow St., which StarMetro first reported in Nov. 2017, represented to some a disturbing trend that highlighted the widening gap between multimillion-dollar condo owners and mid- to low-income renters.

“The whole point of building social housing is to integrate people into community, so when you’re talking about allowing a social housing section to have a different playground or a different door versus the other sections, it creates all kinds of new situations in the West End that we haven’t seen before around social stigmas,” said Sharon Isaak, a long-time advocate for renters in the West End.