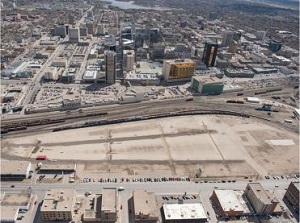 The City of Regina is seeking more public input on a proposed neighbourhood plan for the revitalization of the railyard site at an open house Wednesday.

“I think it’s important that we get it right and we don’t assume and move forward with a report that doesn’t reflect what the community wants to see,” said Mayor Michael Fougere at a recent city council meeting.

The city has done extensive consultation over the past couple of years and come up with several options for what the land might look like after it’s developed.

The land encompasses the area bordered by Dewdney Avenue and the railway corridor to the north and south; Broad Street and Albert Street to the east and west.

Some 1,500 residents provided feedback after three concept plans were released in May of 2016. Consultants compiled those suggestions into the new concept plan that envisioned the space as a mixed-use neighbourhood.

The plan included a market building, a grocery store, restaurants, a cultural space and a linear open space along the railway corridor to provide safe separation between the neighbourhood and railway activities. There would also be eight buildings rising to at least ten storeys, including two at a height of 20 storeys.

“We had several examples and several combinations of what could possibly happen on the railyard lands,” said Fougere. “Now we have the administration looking at what’s possible as well.”

The culmination of the initial planning process is the Yards Neighbourhood Plan — a policy document that will direct future land use, development and servicing, including transportation networks and the type and size of buildings that may be constructed.

Keep reading and watch the video in the Regina Leader-Post