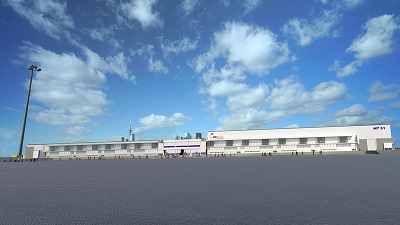 Video of the current space and a designer’s rendering of the new space can be seen here: https://vimeo.com/257582603

“Hearing the clear and recurring requests from Toronto’s repeat film clients for more studio space in our city, we asked every agency in Toronto to audit their inventories for large sites that could be leased to the film industry,” said TorontoMayor John Tory. “I am gratified today that PortsToronto and Toronto’s studio veterans – Cinespace – have come to this agreement in the Port Lands. Our proud city and our award-winning industry look forward to a long and steady stream of new film and television production activity in the heart of Toronto.”

Now in its 30th year of operations, Cinespace is a Toronto success story and the largest private owner and operator of studio space in North America, specializing in the development, management and operation of space and support for the film, television, and digital media production industry.

“Toronto’s film industry has great potential for further growth and success,” said Steve Mirkopoulos, President and CEO of Cinespace. “The Cinespace family is proud to move on phase two of our multi-year, multi-million-dollar investment and intensification initiative. The new Marine Terminal studio complex will feature 165,000 square feet of production space that both relocates and enhances capacity recently displaced, and most importantly keeps it inside Toronto’s strategically important studio district.”

Cinespace’s film and television production activities will occupy Marine Terminal 51 and a portion of the Cruise Ship Terminal. It will not affect or displace industrial port operations and cruise ship activities that will continue unabated on PortsToronto’s property.

“We are pleased to have signed a lease agreement with Cinespace and be in a position to support a successful Canadian company, a burgeoning local film industry and the City of Toronto’s vision for the Port Lands as an important economic district,” said Geoffrey Wilson, Chief Executive Officer, PortsToronto. “The Port of Toronto continues to be a significant import centre bringing approximately 2.2 million metric tonnes of bulk cargo such as sugar, salt, aggregate and construction materials to the city in 2017, as well as supporting a growing passenger cruise ship business. However, after careful study of current operations and future needs for the Port, it was confirmed that our marine terminals property could also accommodate new studio space in some of its existing buildings. Full utilization of PortsToronto’s holdings is a priority and we are pleased to be welcoming Cinespace to our property and supporting this important economic sector.”

City Councillor, Paula Fletcher, Chair of the Toronto Film, Television and Digital Media Board said, “Toronto’s screen industries are experiencing a period of significant growth and investment and there is a need to protect and enhance studio infrastructure in our city. Planned initiatives in the Port Lands area will create new opportunities for related land uses, drive business investment and create jobs. This announcement is good for business, good for the area, and good for Toronto.”

For more than 100 years PortsToronto has worked with its partners at the federal, provincial and municipal levels to enhance the economic growth of the City of Toronto and the Greater Toronto Area. PortsToronto owns and operates Billy Bishop Toronto City Airport, the Outer Harbour Marina; and a 52-acre parcel within the Port of Toronto that includes Marine Terminal 51 and 52 as well as the Cruise Ship Terminal. This property is utilized for cargo operations including bulk and general cargos and passenger ship operations.

About Cinespace Film Studios:
Cinepace Film Studios is the largest private owner, operator and developer of space for film, TV and digital media production in North America, with over 2 million square feet of space in both Toronto and Chicago.