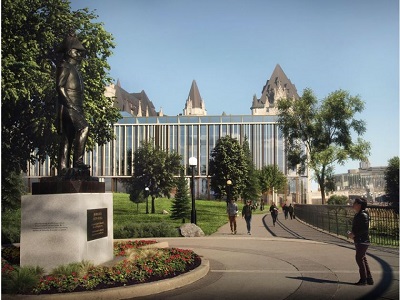 The owner of the Château Laurier has filed a new design for its proposed addition, attempting to make the contemporary wing complement, not overwhelm, the historic hotel.

A heritage brief submitted with the package at city hall this week says “limestone fins” on the north-facing side, fronting Major’s Hill Park, will break up the height of the building, which is proposed to be one storey shorter than the previous iteration. The addition is now proposed to be seven storeys.

One of the knocks against the previous design was that the glassy facade sullied the vista to the limestone and copper hotel. Including limestone in the revised design might win over critics who are worried about ruining the heritage value of the property with a contemporary hotel addition.

The city says, “The exterior will appear more solidly stone when viewed at an angle.”

In fact, it was the city’s urban design review panel, which is made up of outside architects, that suggested there should be more stone in the design to reduce the contrast with the existing hotel.

Larco Investments, which owns the hotel, asked its designers at architectsAlliance to come up with another vision for the addition after the last one released in February received a strong rebuke from heritage advocates, such as Heritage Ottawa, which said the design had “all the charm of a box store.”

There was no “as we heard it report” produced by the city during the public consultation on the February design, but the city said people criticized a perceived incompatibility with the hotel.

The architects have also changed the exterior design of the other sides of the proposed addition. The east-facing and west-facing sides have diagonal glass panes with limestone frames. The lower levels of the hotel would be opened up to the terraces along the Rideau Canal.