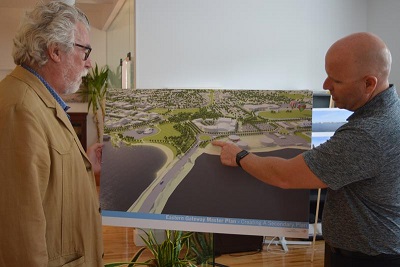 The eastern end of Charlottetown could be getting a major makeover over the next number of decades.

The City of Charlottetown has put the Eastern Gateway Waterfront Master Plan back up for discussion, a plan the Charlottetown Area Development Corporation originally commissioned in 2011.

A public meeting was held in Charlottetown on Tuesday night.

Coun. Greg Rivard, chairman of the city’s planning committee, said the plan represents a tremendous opportunity and challenge for the city.

“The eastern gateway is the primary entrance into Charlottetown from the eastern end of the Island,’’ Rivard said. “It is very important that this area of the city be designed in a manner that provides a very good impression to those coming into historic Charlottetown.’’

The provincial government is already talking about what is likely to be the first part of the plan — building a roundabout at one of the busiest intersections in the province, Grafton Street and Riverside Drive, to address traffic concerns and improve pedestrian and bike traffic over the bridge.

As for the city’s involvement, the plan calls for the city to expand the Charlottetown Event Grounds, an expansion that would include a beach at the foot of the Charlottetown approach to the Hillsborough Bridge. And, with upgrades to the nearby wastewater treatment plant, the city is quick to boast that the water is safe to swim in.

Over by Eastlink Centre, Pond Street would be cut off from Riverside Drive and instead loop with Beach Street.

The plan also includes drawings for a new multi-purpose arena where the provincial garage is. There’s been no start date on that project, but the city has a steering committee looking for funding partners.

“This is a great opportunity to take advantage of the large amount of existing open space in this area by creating a long-term vision for how it can be integrated together to create a park-like setting similar to Victoria Park,’’ Rivard said about the beachfront property.

It should be noted that city council has not yet adopted this plan as policy, but Alex Forbes, manager of planning, said what it does give council is guidance.