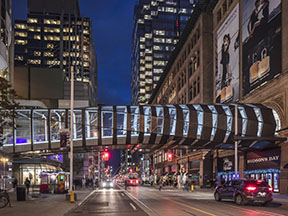 To better integrate CF Toronto Eaton Centre with Hudson’s Bay and Saks Fifth Avenue’s flagship locations in downtown Toronto, CF decided to replace the existing pedestrian bridge with an exciting new connection between the two major retail landmarks above Queen Street, one of the city’s busiest streets. Featuring enhanced aesthetics and functionality, the bridge’s development involved a multi-phased process that required assembly adjacent to the shopping centre on James Street before being seamlessly lifted into place. The structure, which features glass and etched bronze cladding panels, provides distinct interior and exterior vantage points for users looking outward or pedestrians looking above from street level.

“As construction manager, PCL played a key role in delivering this one-of-a-kind, world-class project in partnership with Cadillac Fairview, and we congratulate and thank the entire team for this achievement,” says David Stewart, director, Project Management, Development, Cadillac Fairview. “PCL exemplified all of the qualities that the award calls for: innovation in means and methods; overcoming challenges related to budget, schedule and quality control; unique safety and environmental protocols; and with professionalism exhibited by all members of the project team.”

The original concept for the replacement was to demolish the existing structure in sections and stick build the new bridge in its final position. However, this concept involved significant negative impacts to business and transit, prompting the team to review alternate possibilities and concepts for consideration. The resulting strategic decision to construct and pre-assemble the bridge on the ground next to the retail destination enabled PCL to minimize impact to clients, neighbours, transit and tenants of the mall.

“It is an honour for PCL to accept the TCA’s Best of the Best Award in recognition of Cadillac Fairview’s investment in this iconic structure which has become a new cultural landmark for the City of Toronto,” said Matt Stainton, PCL Toronto senior construction manager. “This award is a testament to the collaborative relationships built between our team and multiple partners and stakeholders, coupled with a steadfast commitment to innovation, safety and limited disruption to business operations and the community.”

Get a behind-the-scenes look at the team involved in developing, designing and constructing Toronto’s newest architectural icon in this short documentary profiling the creation of the CF Toronto Eaton Centre Bridge.

PCL is a group of independent construction companies that carries out work across Canada, the United States, the Caribbean, and in Australia. These diverse operations in infrastructure, heavy industrial, and buildings markets are supported by a strategic presence in 31 major centres. Backed by PCL’s 112-year legacy, and with more than four decades of experience in Southwestern Ontario’s dynamic construction market, the Toronto office is PCL’s largest district with more than 550 of the construction industry’s most-talented professionals and an annual construction volume of more than $1.0 billion. For more information, visit PCL.com/Toronto.