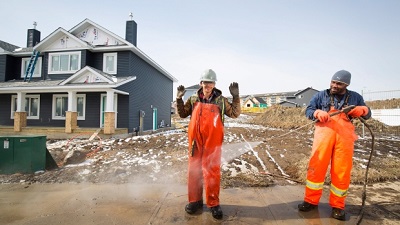 One company has been trying to focus on the positives by honouring companies that have helped with the massive effort.

CertainTeed will donate $10,000 to local Fort McMurray charities on behalf of Chaulk and four other honourees. The company chose Chaulk because of his dedication to elders in the community and his commitment to help a widow rebuild, even if she doesn’t receive enough insurance compensation, said a news release.

Chaulk’s companies have finished or are in the process of completing more than 40 homes lost in the May 2016 wildfire. It’s the most work his company has ever undertaken, he said,

“(It’s) just the way we operate anyway,” Chaulk told CBC News. “If people think we go above and beyond, that’s great.”

Chaulk’s company has been working overtime this month. In one case, the company worked extra hours to ensure a homeowner was able to move into her newly rebuilt house for Christmas.