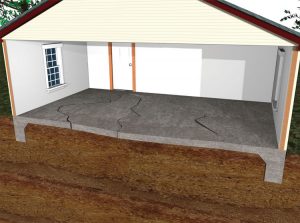 As reported in the Cape Breton Post, a Cape Breton home built atop an uneven foundation has been the subject of a longstanding court battle.

In a Nova Scotia Supreme Court decision released Friday, a local concrete company was ordered to pay over $76,000 in costs and pre-judgment interest in relation to a problematic concrete slab.

MacLean Concrete Construction Ltd. of Scotchtown was hired to lay a foundation for the new home built in Glace Bay.

“At the outset, this case was about an unlevel concrete floor poured for new home construction,” Justice Patrick J. Murray noted in his decision.

“This is not a common event and is one requiring expert evidence.”

According to the decision, two Glace Bay homeowners have been deprived of a level floor since their house was constructed in early 2012.

Their primary contractor E. Weyman Construction Ltd. of Glace Bay had hired a subcontractor to complete the necessary foundation work.

The homeowners later stopped payments in their contract with Weyman Construction after a problem was detected.

The primary contractor then began a court action in 2013 seeking recovery of monies owned.

“I found that the concrete slab for the new home was not level,” Murray said in the decision.

Murray said the homeowners were successful in a counterclaim with a set-off of $115,171 from the amount of $145,720 owned to the contractor.