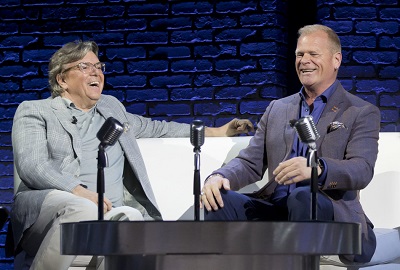 TORONTO (June 6, 2019) – CTV announced live today from the #CTVUpfront in Toronto that Canadian TV icon Mike Holmes and his family are coming to Bell Media. The new partnership is anchored by the development and production of the all-new original television series HOLMES FAMILY RESCUE, featuring Holmes teaming up with his children Mike Jr. and Sherry in their biggest show yet, a Summer 2020 tent-pole series for CTV.

Something never seen before from Mike Holmes, the CTV Original Series HOLMES FAMILY RESCUE is an all-new lifestyle program featuring the fan-favourite TV host and professional contractor taking on the biggest and most challenging journey of his career. Helping homeowners MAKE IT RIGHT® in epic fashion are Mike’s kids – Mike Jr. and Sherry – who join their father to change lives and turn this inspirational new series into a family affair. Over the course of the season, the Holmes family works tirelessly to drastically improve and transform the lives of homeowners with their trademark relatable, hilarious, and heartfelt family dynamic.

“I’m absolutely thrilled about this new partnership with CTV,” said Mike Holmes, President, The Holmes Group. “I look forward to bringing new content to CTV’s portfolio of networks and spreading the MAKE IT RIGHT® message with even more Canadians across the country.”

“We’re very happy that Mike Holmes has chosen CTV as his new home,” said Mike Cosentino, President, Content and Programming, Bell Media. “In addition to being a Canadian TV icon, Mike is someone who transcends television and has become a trusted part of the lives of Canadians. Now joined by Sherry and Mike Jr. for HOLMES FAMILY RESCUE to headline Summer 2020 on CTV, we’re also thrilled to introduce construction’s first family to help anchor our newly rebranded CTV Life Channel.”

Also announced as part of this extensive new partnership and solidifying the Holmes family as CTV Life Channel’s foremost personalities is a second series, HOLMES 911, premiering this fall on CTV Life Channel. From Make It Right Productions, the show features Mike Holmes going back to where he started: helping homeowners. But this time, he’s being helped by his kids, contractors Mike Jr. and Sherry, who share Mike’s passion for helping people who have been the victims of unscrupulous contractors and bad DIYers. Over 12 episodes, Mike, Mike Jr., and Sherry fix five houses, and viewers see these “houses” become “homes” again.

CTV Life Channel will also feature a vast library of previous programming from the family’s Make It Right production company, including the 2018 series HOLMES: NEXT GENERATION, which will be available to Canadian viewers for the very first time.

With more than 10 record-breaking, top-rated, and award-wining series and specials under his belt, Mike Holmes’ no-nonsense approach and MAKE IT RIGHT® attitude has struck a chord with television audiences and industry leaders worldwide. He has changed the way people think about their homes and the building industry for good.  Mike has joined forces with the next generation of Holmes’ – his son Mike Jr. and daughter Sherry Holmes, both contractors who grew up playing, watching, and working with their dad.