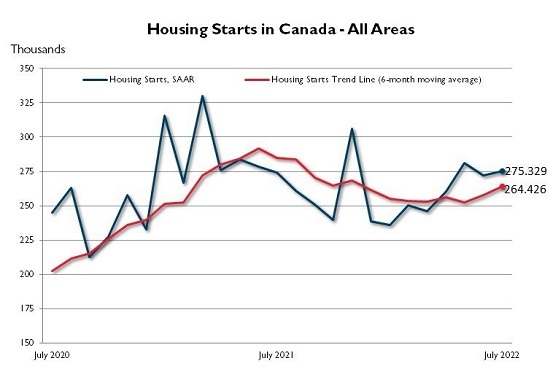 The trend in housing starts was 264,426 units in July, up from 257,862 units in June, according to Canada Mortgage and Housing Corporation (CMHC). This trend measure is a six-month moving average of the monthly seasonally adjusted annual rates (SAAR) of housing starts.

“The monthly SAAR and trend were higher in July compared to June nationally, as historically elevated levels of housing starts activity continue in Canada, which have been well above 200,000 units since 2020,” said Aled Ab Iorwerth, CMHC’s Deputy Chief Economist. “Monthly SAAR housing starts in Canada’s urban areas declined in July, driven by lower single-detached starts. However, Vancouver and Toronto both registered much stronger declines in multi-unit starts than in single-detached starts, while Montreal saw similarly large declines in both unit types.”

Rural starts were estimated at a seasonally adjusted annual rate of 20,958 units.