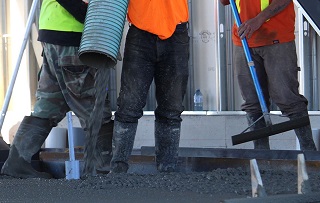 Concrete is the most used building material and it has been used for many years. More than 5,000 years ago, Egyptians mixed mud and straw to form bricks and used gypsum and lime to make mortars. By 200 BC, the Romans were successfully building with concrete and even used animal products in their cement as an early form of admixtures. However, after the fall of the Roman Empire in 476 AD, the techniques for making pozzolan cement were lost until the discovery in 1414 of manuscripts describing those techniques.

Modern concrete is due to the invention of Portland Cement in 1824 by Joseph Aspdin. “Joseph called the product Portland cement because he believed set mortar made from it resembled ‘the best Portland stone’ and Portland stone was the most prestigious building stone in use in England at the time,” says Stuart Galloway, President, 20/20 Show Productions and producer of the Canadian Concrete Expo. “However, the patent doesn’t describe what we today call ‘Portland cement’.”

A bricklayer by trade, Joseph experimented with the manufacturing of cement until he created a marketable product. He then went into partnership with a neighbour, William Beverley, set up a production plant in Wakefield, and relocated his family from Leeds to Wakefield. That plant closed in 1838 after the Manchester and Leeds Railway Company purchased the land. Aspdin moved his equipment to a second site nearby in Kirkgate. His younger son, William, ran the plant until 1941 when he ceased to work for his father and Joseph partnered with elder son, James.

Two years later, William established his own plant at Rotherhithe (near London) and used a modified version of his dad’s recipe to introduce a new cement that proved to be substantially stronger than the cement invented by his father. William used higher limestone content, burnt it at a higher temperature and ground the previously discarded clinkered material, thereby increasing wear and tear during the grinding process. The following year, Joseph retired and transferred his share of the business to James. In 1948, James moved the plant to a third site in the area, and that plant continued in operation until 1900. Also, in 1848, William relocated to Kent in order to take advantage of the local’s proximity to large chalk reserves. He never filed for a patent to his modified process, and a history of suspicious business arrangements and missteps proved he may have been dishonest and incompetent.

Keep reading this blog on the Canadian Concrete Expo website