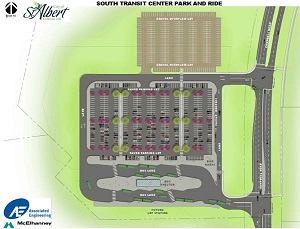 Preparation for construction of the Campbell Road Park and Ride Transit Centre is underway but construction won’t begin until a natural gas line gets moved.

City contractors have been working since the beginning of March to clear brush from the site along Campbell Road near St. Albert Trail and were expected to complete that stage of the project this past week.

Kevin Bamber, director of St. Albert Transit, said trees taken down from the site are being hauled to Alberta-Pacific Forest Industries to be recycled and turned into wood products such as lumber.

“That was positive news,” he said.

Construction on the transit centre itself will begin after an ATCO gas line running through the property is relocated. Bamber said the city is meeting with ATCO Gas to work out a plan for when that line will be moved.

“Depending on what’s involved with the relocation, that will determine when the next steps can happen,” he said.

“Their plan is just to move it to the edge of our property … and then once that’s moved, then construction can kind of begin full-on after that. Up until then, we can only do minor things.”

The city anticipates a one-year timeline from when construction starts to when the facility will open to the public. If the pipeline’s relocation takes longer than desired, Bamber said the city may be able to compress its time frame for construction.