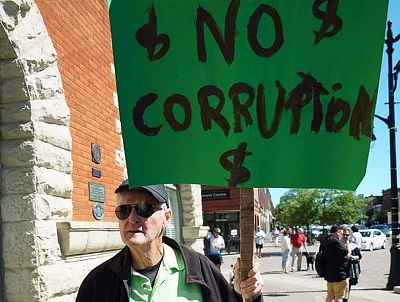 Calls for Collingwood mayor to step down over construction deal

News that Collingwood, Ont., Mayor Sandra Cooper’s brother may have received a secret cut of a $12.4-million construction contract is prompting calls for the mayor’s resignation.

Dozens turned out to protest outside of the town’s city hall on Monday, saying they were outraged at the allegations detailed in court documents filed by the Ontario Provincial Police stemming from a fraud investigation beginning in 2013.

The police investigation found Cooper’s brother, Paul Bonwick, a former Liberal MP for the area, worked in the background to broker the multimillion-dollar deal that netted his company $756,740.42 in consultation fees.

Longtime Collingwood resident Ulli Rath is one of those now demanding that Cooper resign.

“I would prefer that before she steps down, she has the courage to sit down and tell people the truth and just what is going on.”

Resident Cate McMillan wants answers too. “I want to her to be open and honest with us and let us understand what happened with her brother and I just hope that she is concerned like we are.”

The calls come nearly a week after CBC News reported ona fraud investigation going back to 2013 around Bonwick’s company, Green Leaf Distribution, which documents show earned a 6.5 per cent cut of a construction contract brokered with the town in 2012 to enclose a community pool and outdoor hockey rink in the growing resort community.

In the unsealed police 2014 documents, investigators alleged Bonwick’s role was kept “secret” from council, and that the payment to his company was “shrouded in various layers of secrecy and is evidence of fraudulent activity — to which the Town of Collingwood is the victim.”

None of the allegations in the documents against Bonwick, his colleague Abby Stec, and the town’s acting chief administrative officer, Ed Houghton, have resulted in any charges or been tested in court. The force won’t say whether the allegations still stand.