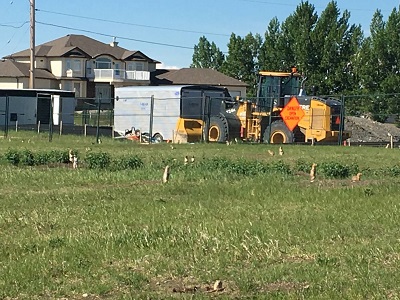 As reported on Global News, their squeaks fill the air like a rodent symphony.

The green space near Saddlebrook Way in northeast Calgary is home to an endless parade of gophers popping from the soil.

Her home backs onto the green space in Saddleridge that’s packed with Richardson’s ground squirrels. The trouble is the gophers are expanding their territory into nearby homes.

Mailath is concerned that recent construction at the green space is causing the migration of gophers into her backyard but pest control companies say the issue is more likely related to last year’s young ones being pushed out of their homes.

“It’s common for people to believe that there is construction going on and therefore they have a pest problem. But pests are constantly trying to expand their territory,” said Bill Martin, owner of Martin’s Pest Control.

Mailath hasn’t called a pest control company yet because she’s worried any money she spends will be in vain.

“It’s too much for a first-time homeowner to deal with on their own,” Mailath said

It’s a tricky situation that Martin says ideally needs the cooperation of the owner of the green space and neighbours to collectively deal with.

“If you can get the city involved or if you can get the people who own the green space involved, it’s always good to do. The more people to get involved, the better because it’s really a group effort. Very often we will have a case where the whole street gets on board and we will do it all at the same time and they will get much better results,” Martin said.

Martin uses a rodenticide specifically for gophers, injected deep into burrows to kill them. He advises not to be like a few of his frustrated customers who either flooded their basements or blew up property in futile attempts at critter control.